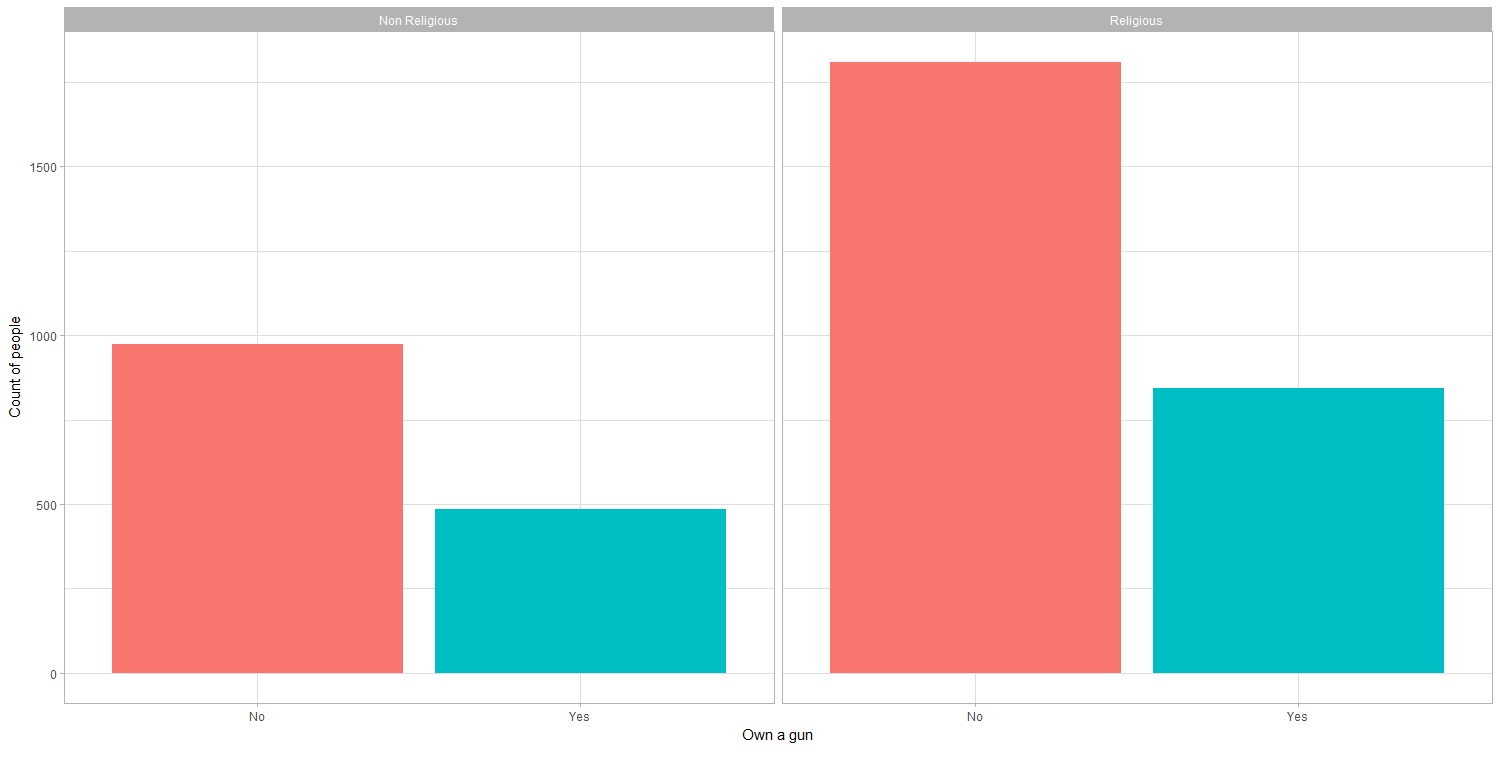 I will be trying to answer this question using a US data set of 1400 people. Before i take this dataset completely apart and dissect it inside out, I wanted to take the data for a drive to the backyard. I wanted to see whether being religious has any bearing on carrying a gun. In other words, my hypothesis was: If the religious people have a higher rate of carrying guns than the non-religious lot. It was found that religious people have been found to be carrying more guns. At least this is what it looks like if we see the graph given above.  It is difficult to pin this down to religion and it will be unfair to find associations of any kind at this hour. Nevertheless, on first look, there was a higher gun carrying rate among those who called them religious.

A closer look at the graph above, however, reveals a clearer picture. Out of all the religious people, 35% owned a gun at least once in their life. While, among the non-religious lot, only 27% claimed to have owned a gun (Table 1).  In the world of statistics, we never arrive a conclusion unless we have tested a hypothesis using a scientific test. One such test is called a Chi-Square test. It is done to see whether an actual difference exists between two categorical variables. But enough of the statistical jargon. Lets cut the chase and show you the results.

Table 1: Proportion of people carrying a gun by religion

The chi-square test showed a value of 26 for the chi-square itself and a p-value of  2.193e-07. In the world of probabilities, there is this weird thing called a p-value. If you want a simple definition for it, then you should better start trying your luck in another field. But since you are here, how about if you learn at least one new thing about statistics with every post. In simple words, p-value refers to your chances of obtaining a result by pure chance. In this scenario, it means the chances of finding a difference of 35% vs 27% is very small, 0.0000002193 in one or 0.00002193% to be exact. Since its extremely rare to get this result by chance alone, we accept that there is an actual difference existing in the whole population as well (not just the sample we studied).

Now, what does this mean. Are religious people more prone to violence? Is there a role of intolerance? Since this study was done in American population, we deduce that majority of the people belonged to Christianity. But is this pattern also visible among other religion followers as well? A good study opens doors to new questions. This was just one of aspects regarding gun violence and gun carriage, several other questions will be asked by me of this data and will return soon with more answers. Chow for now.

Please read the copyrights information and the disclaimer here

Fresh as an apple

A letter to the Chief Secretary, Gilgit Baltistan regarding his derogatory behavior

Depression and Diabetes: ” A loosing combination “

From the land of glee

Love by a Researcher

Always be yourself, express yourself, have faith in yourself, do not go out and look for a successful personality and duplicate it.

Action is the foundational key to all success.

Desire is the key to motivation, but it's determination and commitment to an unrelenting pursuit of your goal - a commitment to excellence - that will enable you to attain the success you seek.

Insanity - a perfectly rational adjustment to an insane world.

Do not worry about your difficulties in Mathematics. I can assure you mine are still greater.
Albert Einstein